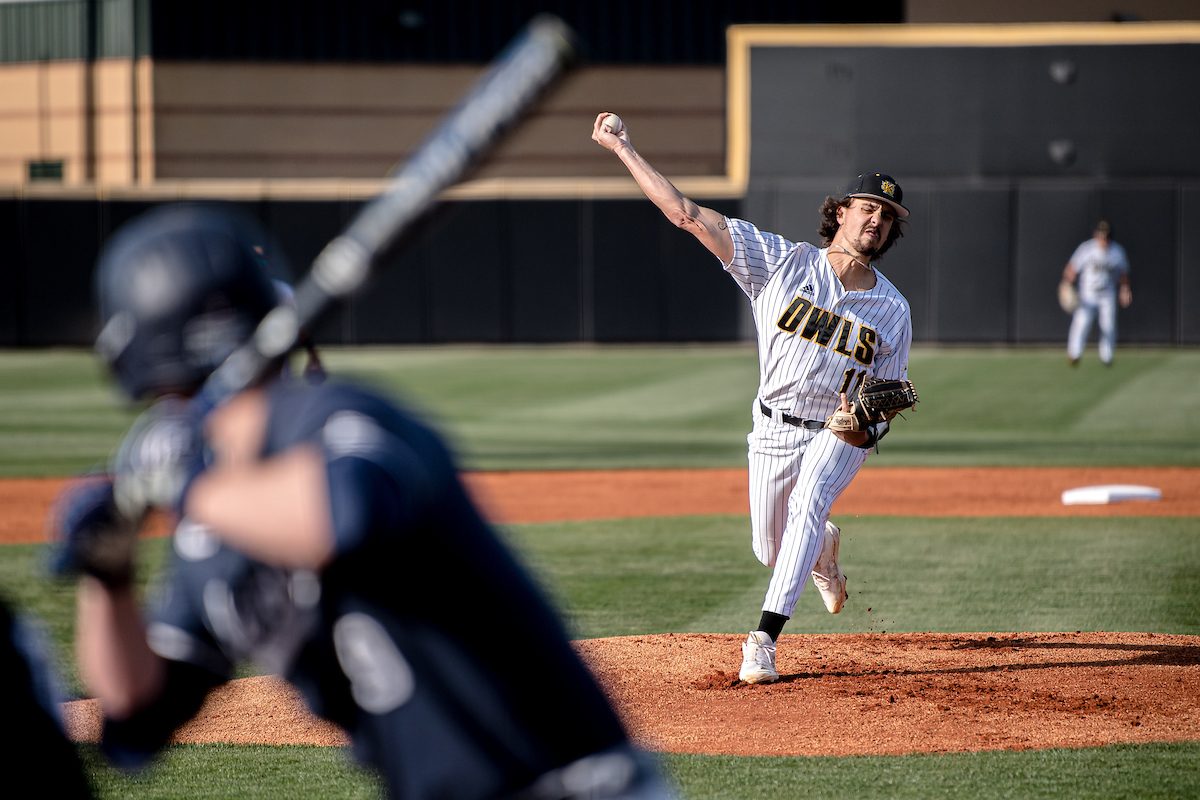 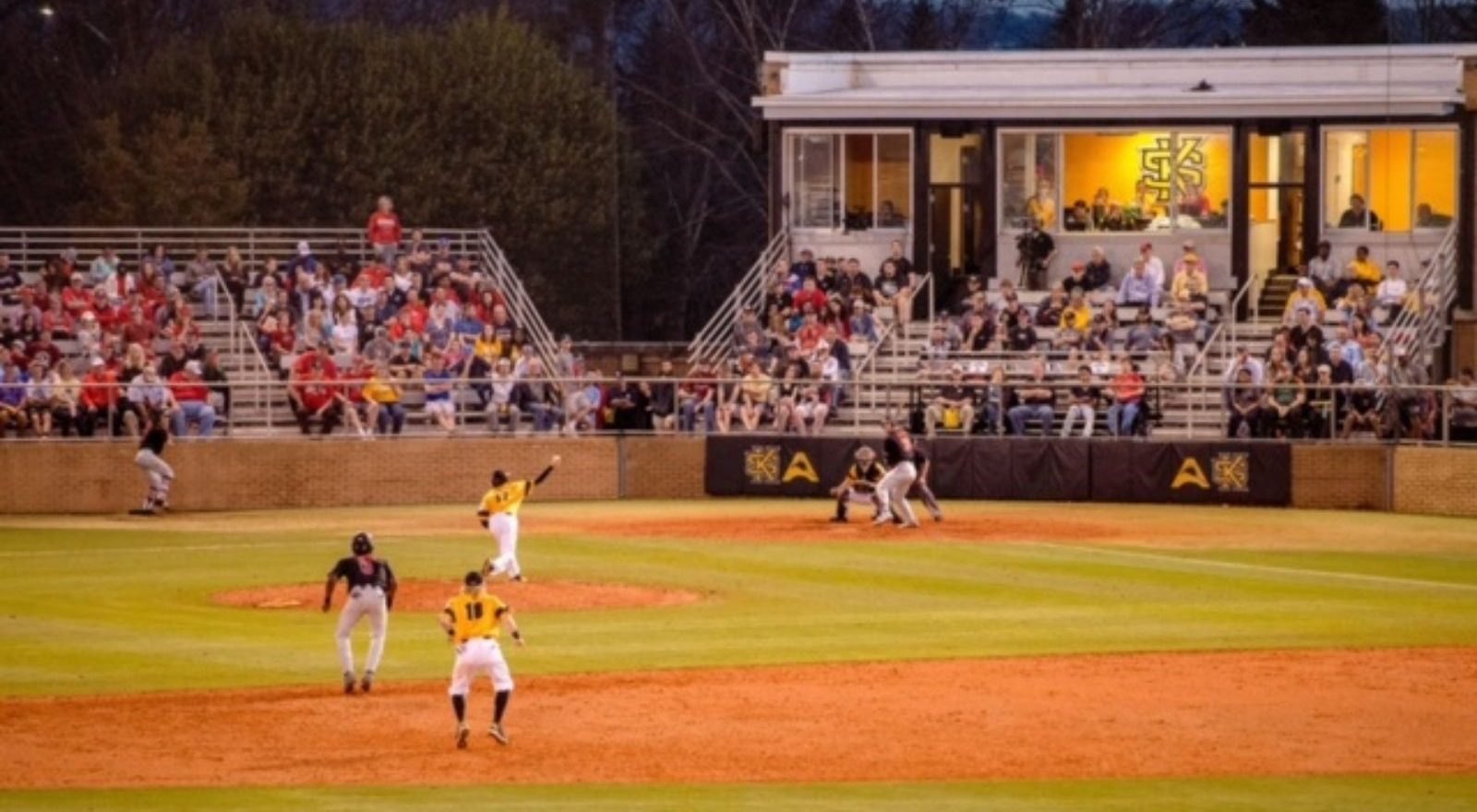 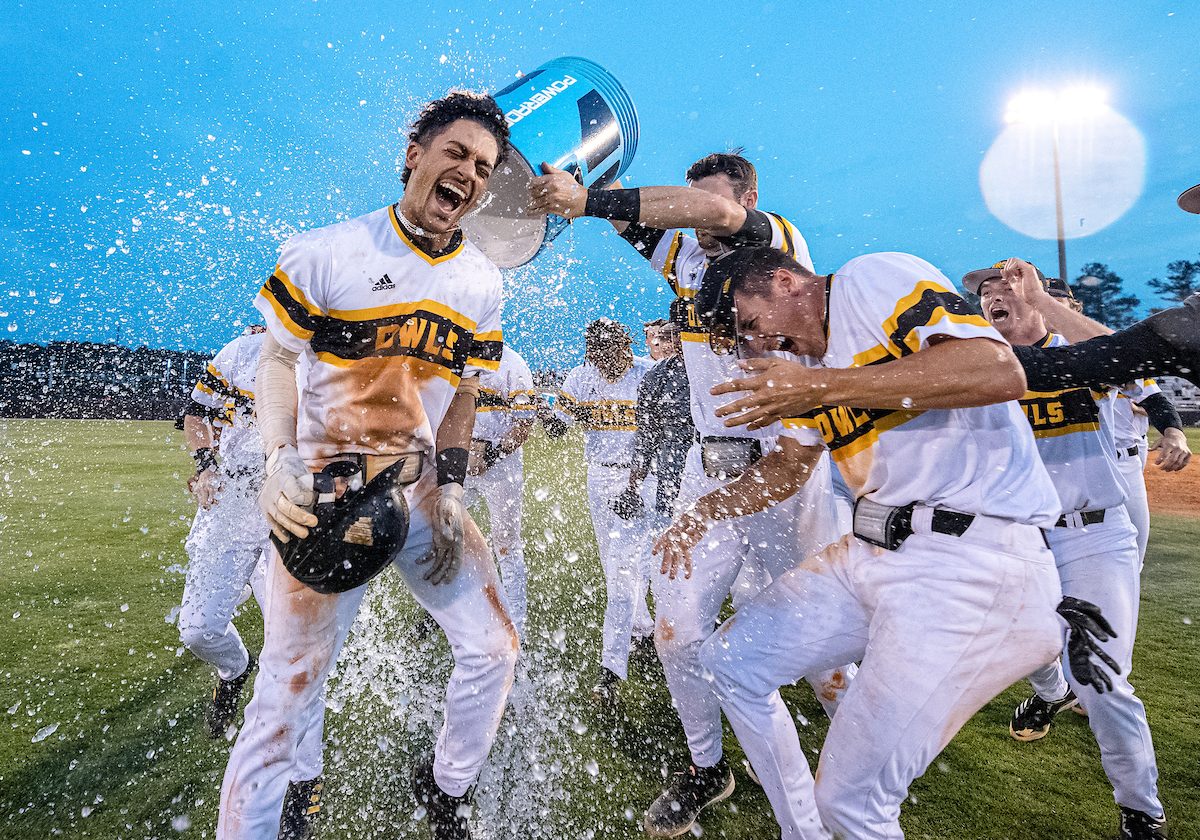 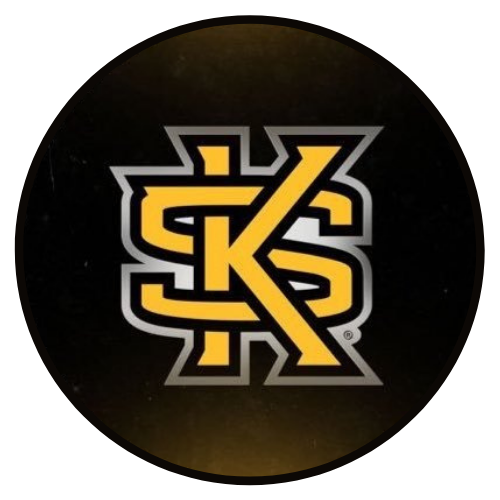 Coe Baseball, LLC is hosting a Prospect Camp for high school athletes. This will give the athlete a chance to perform at Kennesaw State University and showcase for the entire KSU Baseball Staff. Included will be: offensive/defensive workout and a scrimmage. We hope to see you there! 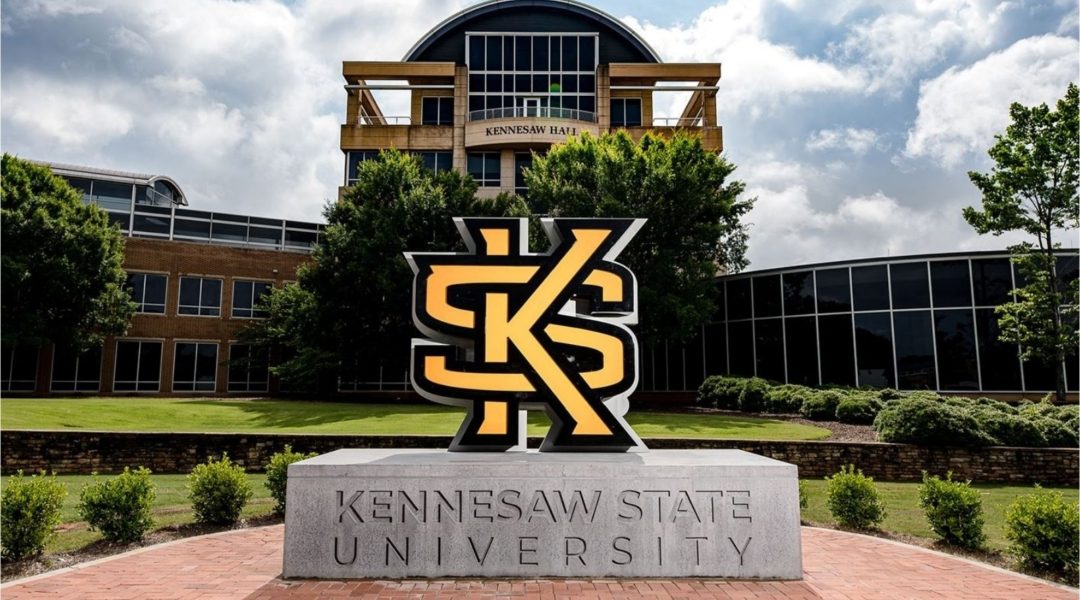 The Owls welcome Coe back after nearly 12 years as a scout for the Texas Rangers, joining the MLB team following a 15-year spell as a player and coach at KSU under newly-retired head coach Mike Sansing.

“Just thinking about Kennesaw State brings back so many good memories,” said Coe. “I hate to leave the Rangers. I really enjoyed that part of my career, but I care too much about the KSU baseball program not to pursue the head coaching job. I want to continue the amazing work that Mike Sansing has done, taking the program further and further every year and it’s my goal to continue that upward trend.”

Coe first stepped foot on the Kennesaw State campus in 1994, transferring from Tennessee’s Cleveland State Community College where he was a second-team All-American.

The catcher made an impact as soon as he slotted into the lineup, hitting 18 home runs and 79 RBIs with a .369 batting average. At the 1994 NAIA Districts in Columbus, Ga., the slugger from East Ridge, Tenn. walked off a win for Kennesaw State College with a homer in the bottom of the ninth against defending district champions Brewton-Parker; the district win would go down in the history books as KSU’s first title ever.

Coe continued his reputation as a top-notch batter throughout the NAIA postseason, earning a selection into the All-Tournament team as the Owls became the 1994 NAIA Baseball National Champions. For his efforts, Coe was named Kennesaw State’s Athlete-of-the-Year.

Despite having a 1994 to remember, Coe managed to one-up himself in 1995. Coe hit for a .455 batting average in the squad’s inaugural year in the NCAA’s Division-II, a rate which lives on as the best batting average in KSU’s history. Winning the 1995 Peach Belt Athletic Conference Player of the Year, Coe continues to hold the Peach Belt records for career slugging percentage with .732 and consecutive games with a home run with seven. He also holds Kennesaw State’s all-time career records in batting average (.411) and slugging percentage, as well as the single-season record for on-base percentage (.545).

His long list of accolades includes the rare distinction of earning All-American honors at three different levels: junior college in 1993, NAIA in 1994 and NCAA Division II in 1995.

The standout’s stunning collegiate career led to his selection by the Houston Astros in the 1995 MLB Amateur Draft. He spent three years with the organization, earning a selection as a 1996 Midwest League All-Star in that time.

Coe would return to Kennesaw State in Sept. 1997 as an assistant coach under Sansing. In his role, Coe coordinated recruitment, developed catchers and hitters, developed practice plans and ran the in-game offense.

During his time as a coach, Coe was inducted with pitcher John Kelly as KSU baseball’s first inductees into the Kennesaw State University Athletic Hall of Fame in 2004. Also inducted that year was Coe’s wife, former Owls softball standout Cara Dornstauder.

He comes to Kennesaw after spending the 2021 season at Bellarmine University, another ASUN conference program. There he served as the hitting and infield coach for the Knights’ inaugural season in Division I baseball. In his year at Bellarmine, three of his position players were granted ASUN accolades. Josh Finerty was awarded First Team All-Conference, Matt Higgins Second Team All-Conference, and Davis Crane All-Freshman.

In 2019, after his playing days with the Cubs came to an end, Upshaw returned to Kennesaw State to complete his Bachelor’s Degree and serve the baseball team as a student assistant coach where he worked primarily with hitters and infielders. Kennesaw State finished 10-8 in the shortened 2020 season, but had several hitters lead the ASUN in hitting such as “Freshman All-American” Nick Hassan, “Most Impressive Hitter in the ASUN” Alex Carballo, and future Atlanta Braves draft pick Tyler Tolve.

From the summer of 2017-2019, Upshaw spent his time as an infielder in the Chicago Cubs organization. After being drafted 405th overall in the 13th round of the 2017 MLB Draft, he spent his first season in Low-A with the South Bend Cubs. In 2018, he was promoted to High-A Myrtle Beach, which was the highest level he would achieve. His career included 163 games with 657 plate appearances and 36 extra-base hits along the way.

Throughout 2016-2017, he spent his sophomore and junior year at Kennesaw State as a middle-of-the-lineup threat and first baseman. Over the span of two seasons, Upshaw played 109 games, hitting .339 with 15 homeruns, 30 doubles, 77 RBI, and 79 runs. He was a crucial part in the Owls winning the 2016 ASUN Conference Championship, where the team went 17-4 in conference play. A few awards he accumulated were: 2017 ASUN All-Conference Second Team, 2016 ASUN All-Conference Second Team, and a 2016 Louisville Slugger Player of the Week.

Upshaw received a Sports Management degree from Kennesaw State. He is a Buford, Ga. native.

Possessing a resume highlighting his elite college recruitment and evaluation skills, Tucker has a history of building championship rosters.

In his first six-year stint in college baseball, Tucker coached and recruited 25 players that would go on to be drafted and signed in the MLB Draft.

Since 2013, he has been an amateur scouting supervisor for Texas Rangers covering Georgia, northern Florida and Tennessee.

Tucker teamed up with Ryan Coe once again in the Rangers organization, signing 15 players in the MLB Draft including two big-leaguers. One of his last actions in his role was to draft Vanderbilt standout Jack Leiter as the No. 2 overall pick.

In his position under Coe at Kennesaw State, Tucker will oversee recruiting, supervise offensive development, and coordinate defensive development with catchers and infielders. The Georgia native emphasizes an aggressive approach to offense and has successfully developed power and production at the collegiate level.

Before his career scouting for the pros, Tucker served as both a recruiting coordinator and assistant coach for Kennesaw State from 2010-13. In his short tenure, he coached and recruited 21 MLB draft picks for the Owls. The former KSU backstop would add his influence at the catching position at his alma mater, overseeing three more draft picks including fifth rounder Ronnie Freeman, Johnny Bench award-winner and first-rounder Max Pentecost and 24th-round pick Brennan Morgan.

Tucker played a similar role for North Georgia prior to returning to Kennesaw, focusing on recruitment and improving the Nighthawks’ hitting and catching. Under his management, the team set a single-season school record for total home runs in a season (65 in 2007 and 72 in 2008). UNG had three catchers drafted in Tucker’s short time including Daniel Petite, current Houston Astros hitting coach Troy Snitker, and Eason Spivey. He also had the opportunity to recruit and sign All-American and MLB left-handed pitcher Chris Rearick.

The Woodstock High School alum impressed in both baseball and basketball during his high school days before getting signed by then assistant coach Ryan Coe to play at Kennesaw State. Tucker became known as one of the best defensive catchers in the program’s history, displaying a tremendous arm and athleticism behind the plate. As a junior, he caught 18 baserunners attempting to steal and picked off three additional runners for a combined 21 putouts and a .429 caught-stealing percentage; these ratios place him among the statistical leaders in the program’s history.

With Tucker behind the plate, Kennesaw State won the Peach Belt Conference Championship in 2002, competed in the NCAA Regionals in three of four years, won the region title in 2003 and finished third in the NCAA Division II College World Series.

Graduating from North Georgia College and State University, Tucker received his Bachelor of Arts degree in history with a minor in business in 2007.

Matthew Passauer joins the Kennesaw State baseball team as the first pitching coach under head coach Ryan Coe after serving as the pitching coach for Miami of Ohio for the last four seasons.

Passauer joined the Redhawks in 2017, helping the Ohio team win its most games since 2011 with 35. The Erie, Pa. native also had his first two pitchers that he had a hand in developing picked by teams in the MLB Draft with Zach Spears heading to the Pirates and Nick Ernst chosen by the Yankees.

The next season, MU sported the 50th-best staff ERA in the nation with a 3.98 and the 48th-best strikeout-per-nine-inning ratio with 9.1. Passauer’s staff also set school records for strikeouts, saves and walks-per-nine-innings.

His last season with Miami was his most successful season of the bunch. Redhawk talisman Sam Bachman was selected ninth overall after an All-American and All-Conference season. Bachman ended the campaign ranked second nationally in WHIP, fourth in hits-per-nine, seventh in ERA and eighth in strikeouts-per-nine. Fellow hurlers Jacob Webb and Grant Hartwig also made it into big-league organizations.

Prior to Miami of Ohio, Passauer was at the helm of the East Georgia State College program for four seasons. In his tenure, he developed 12 All-Conference players, an All-American, a Georgia Collegiate Athletic Association (GCAA) Player of the Year and a GCAA Defensive Player of the Year.

He set a new school record for wins in 2016, a feat that he repeated the next season. In 2017, Passauer was named that year’s GCAA Coach of the Year after winning the conference championship. While at East Georgia, he also coached Richard Lovelady; Lovelady would later transfer to Kennesaw State before becoming a piece in the Kansas City Royals’ bullpen.

Passauer got his coaching start in summer league baseball with the Willmar Stingers where he won two division championships and worked with 23 players who were later drafted by MLB teams.

As a player, Passauer imposed his six-foot-seven frame on the mounds of Duquesne, Maryland and Lee University, where he earned his Bachelor of Science in Chemistry. He would later receive a Master of Science in Kinesiology with a Coaching Education emphasis from Georgia Southern.

I have a question about a certain camp. Who do I contact?

What kind of facilities do you use for these camps?

We mainly use our field at Kennesaw State (Stillwell Stadium). Also, we utilize our newly renovated indoor hitting/pitching facility & our baseball building.

What equipment/apparel is needed for the camps?

Bat, helmet, cleats, tennis shoes, hat, & a glove are the essentials. Depending on the type of camp, the athlete may need to wear a baseball uniform.

Can I get a refund?

Unfortunately, we do not offer refunds. We do offer camp transfers! So if you are not able to attend camp this go around, you will be able to attend the same camp in the future free of charge.